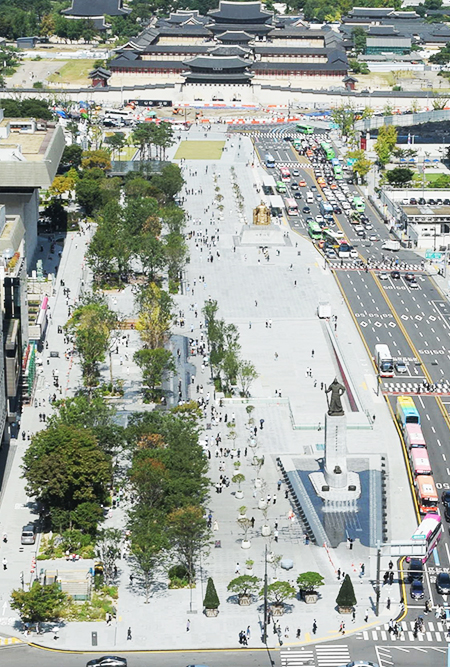 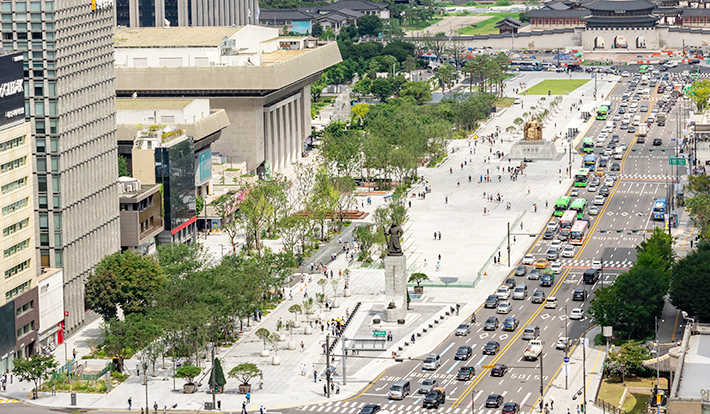 Gwanghwamun Square is the center of
Korean history and culture.

Even after Gwanghwamun Gate was destroyed by fire during the Imjin Waeran, a seven-year war waged between Joseon and Japan following the Japanese invasion of Korea in 1592, the space in front of the gate continued to house government buildings, including the Yukjo ("six ministries"). Gwanghwamun Gate was rebuilt at the original site when the Gyeongbokgung Palace was renovated during the reign of King Gojong, but moved to a new location east of the palace after the office of the Government-General of Joseon was built in the palace precincts after the coerced annexation of Korea by the Japanese Empire in 1910. The gate was rebuilt as a concrete structure during the Third Republic (1963–1972) but restored at its original location in 2008 after continued controversies over its location and building materials. While Gwanghwamun Gate underwent a cycle of destruction and restoration a few times, the open space in front of the gate remained as the center stage of Korean politics where Korean people gather together to exchange their views about various social and political issues. The area has grown into a symbol of democracy and harmony of Korean people as it passed through the most turbulent part of the Korean history.

The 2009 restoration of Gwanghwamun Gate returned the gate’s front space into a public square fulfilling its function and historical significance. It has recently undergone a large-scale renovation project aimed to meet new public demands with cutting-edge digital and multimedia facilities. Reopened in August 2022, Gwanghwamun Square shows historical significance of the site with Woldae, whose restoration had long been an ardent wish of all Korean people. The square is now expected to be used extensively not just for the daily activities of recreation but for main public events such as festivals.