What is buried cultural heritage?

The Seoul Metropolitan Government carried out a detailed archaeological excavation of Gwanghwamun Square as a preliminary stage for the Gwanghwamun Square Renovation Project. The excavation was aimed to prevent possible damage to buried cultural heritage by the project and prepare effective measures to harmonize the work of urban development and preservation of valuable cultural heritage.

2. Overview of the excavation of Gwanghwamun Square and Yukjo Geori

Archaeologists discovered at the Points 2 to 7 a total of 26 building sites, 4 wall sites, 7 drainage sites and 5 well sites, all related with the Six Ministries. They also found that the buildings were situated in the west of the drainage running south to north. The remaining features of the buildings are almost the same in location and form as those recorded in the “Ground Plan of the Outer Government Offices of Joseon”

※ The excavation of Point 1 is yet to take place together with the Woldae site as both are currently occupied by a roadway.

3. Archaeological features discovered during the excavation 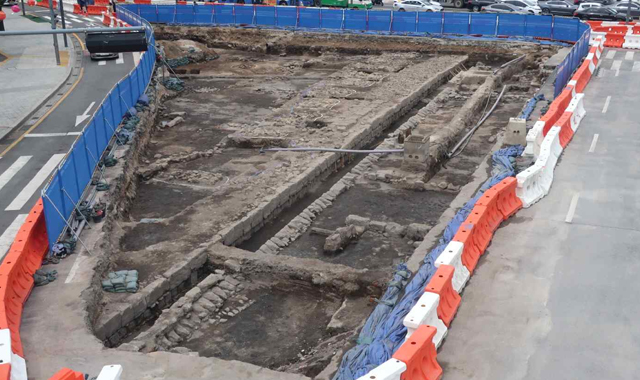 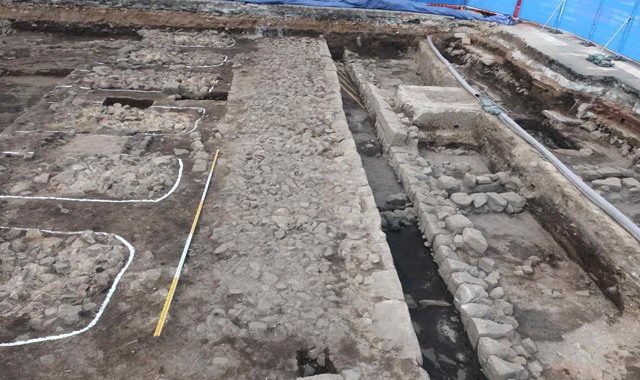 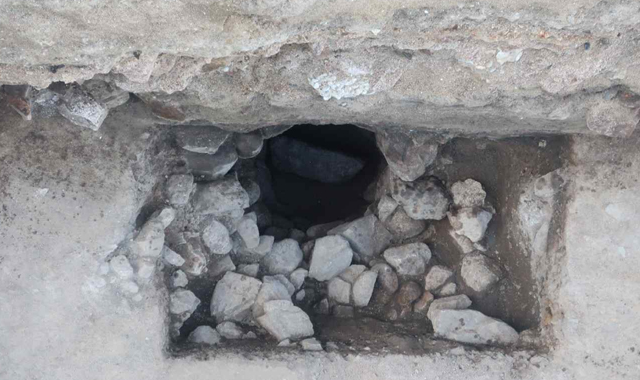 Point 2 situated near the Government Seoul Complex is conjectured to have been in the Samgunbu area. Samgunbu was established during the early Joseon period but incorporated into the Ministry of Rites (Yejo) during the King Sejong’s reign. It was revived as an independent agency by Regent Heungseon Daewongun during the King Gojong’s reign. The excavation of the site revealed structural remains of the building conjectured to have been the outer gallery of the Samgunbu office. It also revealed drainage built in front of the gallery and features of earlier buildings buried in a disturbed layer. Discoveries also include the structural remains of the servants’ quarters buried 70 to 80 cm in depth and traces of a building site under the west sidewalk.

Remains of three buildings and one stone wall were discovered at the point. The archaeological features excavated at Point 3 were buried 1.7 to 2.1 meters in depth. Structural remains discovered south of the Point 3 were two building sites, 1 and 2, and one stone wall. Building Site 3 was found at the North Point 3. There were no structural remains discovered at Point 3 due to the disruption of the layer. 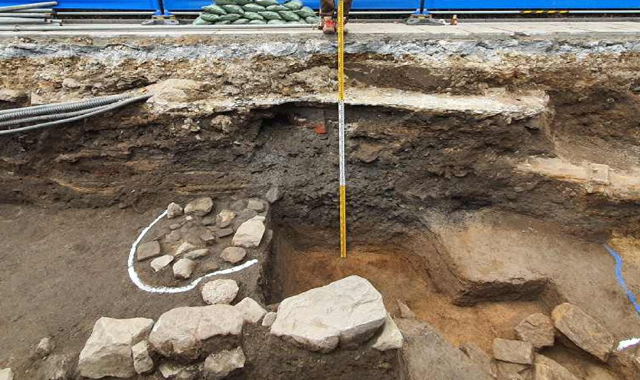 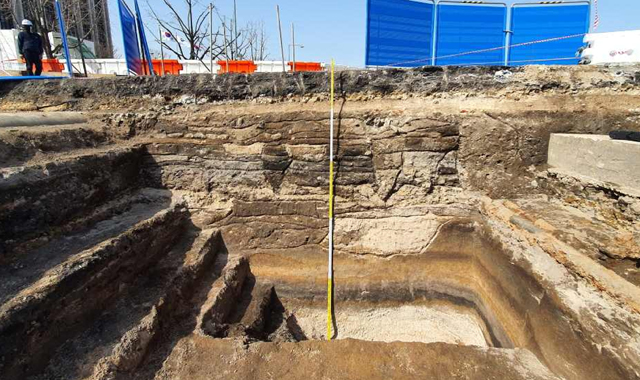 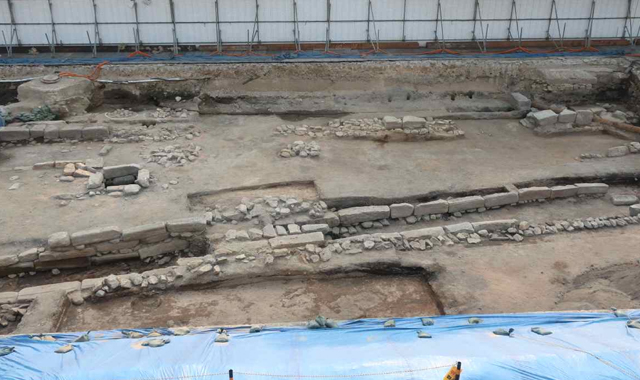 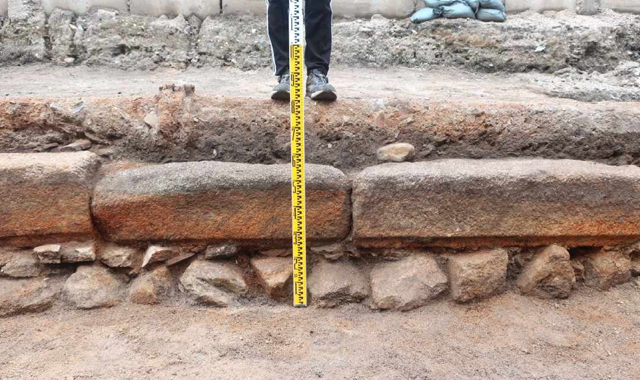 Point 4 is conjectured as the Saheonbu and Byeongjo areas. The structural remains discovered at the site were all at the northern part of Point 4 (conjectured as the Saheonbu area) and there were no discoveries made at the southern part (probably the Byeongjo area) where the archaeological layer was heavily disrupted. The excavation of the site resulted in the discovery of the features of a gate, servants’ quarters, wall and well which are believed to have been connected with the Saheonbu office. In Yukjo Geori, archaeologists found the traces of drainage running south to north and objects mostly dating back to the 16th century. The remaining structures were built on a natural layer of clay and sandy soil.

Point 5 is conjectured to have been the Hyeongjo area. The excavation of the site revealed a few structural remains at the southwestern and southeastern parts. It also revealed that the layers of the central part of Point 5 were severely disturbed largely due to the construction of the subway exit. Archaeologists found the remains of two drainages running south to north in the southern part of Point 5, and the features of a building in the southwestern part of the site. The drainage in the western part of the site was heavily damaged due to the construction of the drainage system in the modern period while the excavation of the eastern part revealed that the long rectangular stones originally used for the drainage were later used for building the site’s rubble stone foundation. 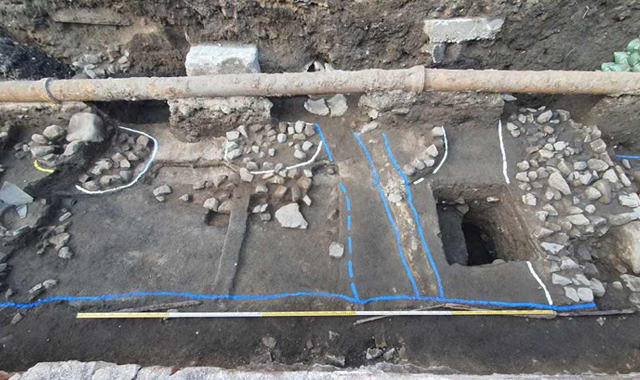 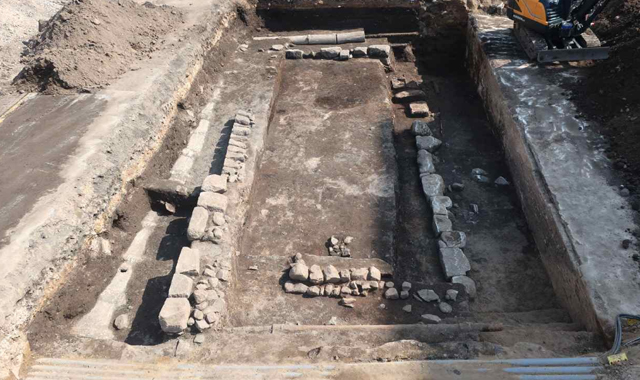 Point 7 is conjectured to have been the Yukjo area and contained private dwellings. Architectural features were found in the entire area of the Point 7 except for the northwestern part, including the remains of 14 buildings (conjectured to have been private houses), two wells and two drainages. Most of these structural remains were discovered at the same or similar layers with some overlapped. A pit dug in the disturbed layer revealed that more features were buried under them. Artifacts discovered at the site include sherds of pottery and ceramic rooftile dating back to the 16th to 18th centuries. 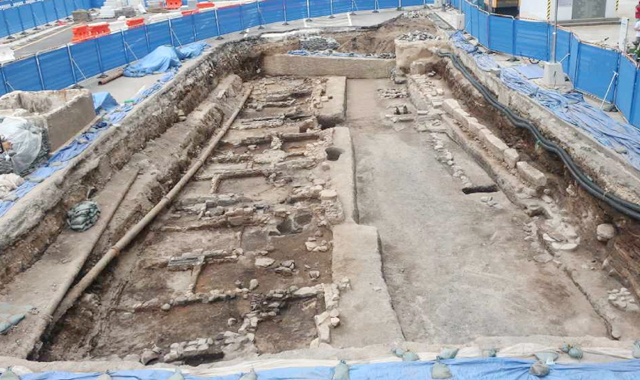 Preservation of the archaeological features

The structural remains discovered at the Saheonbu site were treated to be preserved in situ and exhibited to the public.

As for the rest structural remains, adequate preservation measures were taken with a work of reinforcement to keep them from further damage with the trenches backfilled with good-quality earth and sands. Finally, the sites of discoveries were marked with representational structures set up above the ground together with information signs, thus keeping the traces of the Yukjo for future generations. Visitors to Gwanghwamun Square can find a wealth of the traces of the Yukjo, the six topmost government agencies of Joseon.